It is the video all of your friends have an opinion on – and now animal experts are weighing in on footage of a man punching a kangaroo in the face too.

Dr Mark Eldridge, from the Australian Museum, described the roo’s behaviour as ‘really interesting’, saying the animals would typically flee from dogs but this one chose to defend itself instead.

And while the kangaroo was filmed holding dog Max in a headlock, Dr Eldridge said it was owner Greig Tonkins who was luckier to walk away uninjured. 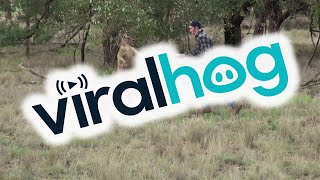