In a three-minute video posted on YouTube which has already gone viral online, President Yahya Jamme of Gambia, was on Friday, seen congratulating his opponent, Adama Barrow, to whom he lost the 2016 presidential election.
According to TheCable News, Jammeh is seen congratulating Barrow in a cheerful mood, and said: “Am calling you to wish you all the best, the Gambian people have spoken and I have no reason to contest the will of Almighty Allah,” he said.
It can be recalled that former president, Goodluck Jonathan, acted in an unusual manner of African leaders when he conceded the 2015 election to Muhammadu Buhari, the incumbent president.
Jammeh has been in power for 22 years. The West African country has not had a smooth transfer of power since independence in 1965.
Watch the video below; 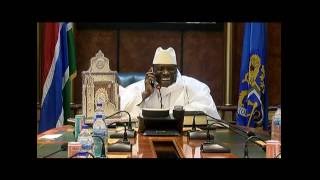 AS WE APPROACH RAMADAN……

Wrongly jailed for 31 years gets just £60 for COMPENSATION!!!