This is the state official broadcast of Yahya Jammeh stating that he has stepped down as President.
Gambia’s Yahya Jammeh finally made the decision to step down on Saturday and has given a national broadcast while accepting the leadership of President Adama Barrow as the democratically elected person to lead The Gambia.
In a televised broadcast, he thanked the people for giving him the opportunity to rule for a long time.
Yahya Jammeh who ruled the Gambia for 22 years before he was defeated at last December’s Presidential Election will now leave the West African country immediately for President Adama Barrow to begin his administration.
Watch video below: 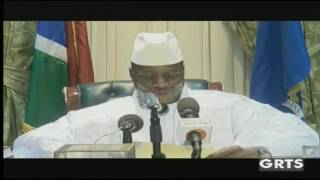 Wrongly jailed for 31 years gets just £60 for COMPENSATION!!!